Only three people were left under the red and white awning of the grease joint: Grady, me, and the fry cook. Grady and I sat at a battered wooden table, each facing a burger on a dented tin plate. The cook was behind the counter, scraping his griddle with the edge of a spatula. He had turned off the fryer some time ago, but the odor of grease lingered.

The rest of the midway—so recently writhing with people—was empty but for a handful of employees and a small group of men waiting to be led to the cooch tent. They glanced nervously from side to side, with hats pulled low and hands thrust deep in their pockets. They wouldn’t be dis appointed: somewhere in the back Barbara and her ample charms awaited.

The other townsfolk—rubes, as Uncle Al called them—had already made their way through the menagerie tent and into the big top, which pulsed with frenetic music. The band was whipping through its repertoire at the usual earsplitting volume. I knew the routine by heart—at this very moment, the tail end of the Grand Spectacle was exiting and Lottie, the aerialist, was ascending her rigging in the center ring.

I stared at Grady, trying to process what he was saying. He glanced around and leaned in closer.

“Besides,” he said, locking eyes with me, “it seems to me you’ve got a lot to lose right now.” He raised his eyebrows for emphasis. My heart skipped a beat.

Thunderous applause exploded from the big top, and the band slid seamlessly into the Gounod waltz. I turned instinctively toward the menagerie because this was the cue for the elephant act. Marlena was either preparing to mount or was already sitting on Rosie’s head.

That moment, the music screeched to a halt. There was an ungodly collision of brass, reed, and percussion—trombones and piccolos skidded into cacophony, a tuba farted, and the hollow clang of a cymbal wavered out of the big top, over our heads and into oblivion. Grady froze, crouched over his burger with his pinkies extended and lips spread wide. I looked from side to side. No one moved a muscle—all eyes were directed at the big top. A few wisps of hay swirled lazily across the hard dirt.

The band started up again, playing “Stars and Stripes Forever.”

“Oh Christ. Oh shit!” Grady tossed his food onto the table and leapt up, knocking over the bench.

“What? What is it?” I yelled, because he was already running away from me.

“The Disaster March!” he screamed over his shoulder.

I jerked around to the fry cook, who was ripping off his apron. “What the hell’s he talking about?”

“ Could be anything—fire in the big top, stampede, whatever. Aw sweet Jesus. The poor rubes probably don’t even know it yet.” He ducked under the hinged door and took off.

Chaos—candy butchers vaulting over counters, workmen staggering out from under tent flaps, roustabouts racing headlong across the lot. Anyone and everyone associated with the Benzini Brothers Most Spectacular Show on Earth barreled toward the big top.

Diamond Joe passed me at the human equivalent of a full gallop.

He didn’t need to tell me twice. Marlena was in that tent. A rumble coursed through me as I approached, and it scared the hell out of me because it was on a register lower than noise. The ground was vibrating.

I staggered inside and met a wall of yak—a great expanse of curlyhaired chest and churning hooves, of flared red nostrils and spinning eyes. It galloped past so close I leapt backward on tiptoe, flush with the canvas to avoid being impaled on one of its crooked horns. A terrified hyena clung to its shoulders.

The concession stand in the center of the tent had been flattened, and in its place was a roiling mass of spots and stripes—of haunches, heels, tails, and claws, all of it roaring, screeching, bellowing, or whinnying. A polar bear towered above it all, slashing blindly with skillet-sized paws. It made contact with a llama and knocked it flat—boom. The llama hit the ground, its neck and legs splayed like the five points of a star. Chimps screamed and chattered, swinging on ropes to stay above the cats. A wild-eyed zebra zigzagged too close to a crouching lion, who swiped, missed, and darted away, his belly close to the ground.

My eyes swept the tent, desperate to find Marlena. Instead I saw a cat slide through the connection leading to the big top—it was a panther, and as its lithe black body disappeared into the canvas tunnel I braced myself. If the rubes didn’t know, they were about to find out. It took several seconds to come, but come it did—one prolonged shriek followed by another, and then another, and then the whole place exploded with the thunderous sound of bodies trying to shove past other bodies and off the stands. The band screeched to a halt for a second time, and this time stayed silent. I shut my eyes: Please God let them leave by the back end. Please God don’t let them try to come through here.

I opened my eyes again and scanned the menagerie, frantic to find her. How hard can it be to find a girl and an elephant, for Christ’s sake?

When I caught sight of her pink sequins, I nearly cried out in relief—maybe I did. I don’t remember.

She was on the opposite side, standing against the sidewall, calm as a summer day. Her sequins flashed like liquid diamonds, a shimmering beacon between the multicolored hides. She saw me, too, and held my gaze for what seemed like forever. She was cool, languid. Smiling even. I started pushing my way toward her, but something about her expression stopped me cold.

That son of a bitch was standing with his back to her, red-faced and bellowing, flapping his arms and swinging his silver-tipped cane. His high-topped silk hat lay on the straw beside him. She reached for something.

A giraffe passed between us—its long neck bobbing gracefully even in panic—and when it was gone I saw that she’d picked up an iron stake. She held it loosely, resting its end on the hard dirt. She looked at me again, bemused. Then her gaze shifted to the back of his bare head.

“Oh Jesus,” I said, suddenly understanding. I stumbled forward, screaming even though there was no hope of my voice reaching her. “Don’t do it! Don’t do it!”

She lifted the stake high in the air and brought it down, splitting his head like a watermelon. His pate opened, his eyes grew wide, and his mouth froze into an O. He fell to his knees and then toppled forward into the straw.

I was too stunned to move, even as a young orangutan flung its elastic arms around my legs.

So long ago. So long. But still it haunts me.

I don’t talk much about those days. Never did. I don’t know why—I worked on circuses for nearly seven years, and if that isn’t fodder for conversation, I don’t know what is.

Actually I do know why: I never trusted myself. I was afraid I’d let it slip. I knew how important it was to keep her secret, and keep it I did — for the rest of her life, and then beyond. 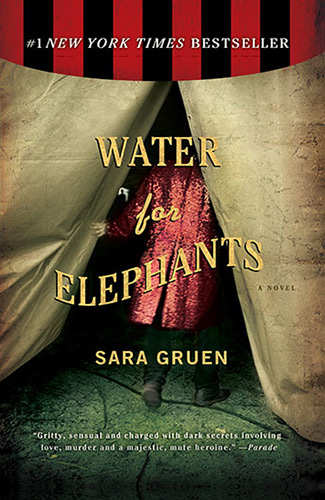