“Are you ready?” says Roger as he gives me a leg up, and I laugh, because I’ve never been so ready in all my life.

And Harry is, too, with his red neck flexed and his ears swiveling like antennae, but never together—if one is forward the other is back, although sometimes they land impossibly out to the side, like a lop-eared goat’s. He stamps and snorts as I lower myself into the saddle and gather the reins, and I forgive him, this time, for not standing still while I mount because while it’s terrible manners there are extenuating circumstances and I, too, cannot be still. I run the reins across the black gloves that cover my wet palms and icy fingers and look back at my father, whose face is lined and stern, and then at Roger, who smiles up at me with his face a perfect composite of tension, pride, and joy.

He lays a hand on my booted calf and says, “Give ’em hell, babe,” and I laugh again, because I have every intention of doing just that.

And then Marjory is leading us to the gate—actually holding the reins, as though I can be trusted to take fences of almost five feet but not to steer Harry into the arena.

“Watch your pace going into the combination,” she says, “and don’t let him rush you. Collect him sharply coming around the turn after the water jump, and if you get past the oxer and you’re still clear, hold him back and take it easy because you’ve already got it even if you take a time fault.”

I nod and look across the arena at the judges because I know that already. We can take eight faults and still tie for first, and if we get none or four we’ve done it, and nobody else has a hope. Marjory is still talking and I nod impatiently and just want to start because Harry and I are going to explode with the excitement of it all, and we’re ready, we’re ready, oh, we’re ready. But I know it’s not Marjory who gets to decide so I try to remember to breathe and ignore her and suddenly it’s easy, as though I’m in a wind tunnel and all of everything beyond Harry and me is on the outside.

Then I get the signal and I think that it’s time to go—think it, that’s all—and Harry goes, walking forward so deep on the bit his nose is pressed to his chest, and as we step into the arena I can see our shadow on the ground and his tail on end like a flag. The man on the PA introduces us—Annemarie Zimmer on Highland Harry, with a commanding lead and yadda yadda yadda—but no one’s paying attention because they’re staring at Harry. No gasps or murmurs this time, not on day three, but then someone goes and wrecks it because I hear some bastard man say, “Now there goes a horse of a different color,” and I know from that one remark that he’s missed days one and two and I hate him because I know he feels clever for the remark. But I suppose I’d say it too, since you don’t see many or any striped horses out there, and before Harry I never knew such a thing existed, but here he is, and there’s no denying that. Not today. Not here.

I hear the whistle and press my calves against him and we’re off. Harry shoots forward like a coiled spring, so compressed his haunches feel like they’re right under me.

I tighten my fingers, No, no, no Harry, not yet, I’ll let you, but not yet, and his ears prick forward, together this time, and he says, All right, and gives me a collected canter that feels like a rocking horse, so high on the up and so low on the down. And we rock around the corner and approach the first jump and he asks me, Now? And I say, No, and he says, Now? And I say No, and then a stride later I can tell he’s about to ask again, but before he can I sayYes, and he’s off and I don’t have to do anything else—won’t have to until we’re over and on the other side, and then I’ll just have to ask him again, and he’ll do it because he loves me and we’re one.

Silence. As we arc over the fence, the only parts of me in contact with anything are my calves and hands and the balls of my feet although it looks like I’m lying on him, so forward am I and curved around his neck with my face alongside where his mane would be if it weren’t braided into a row of nubby topknots. And then bang! We’ve landed, and as soon as his front hooves make contact with the ground I’m back in the saddle and we’re headed toward the brick wall and it’s perfect. I can tell we’re going to be clear because that’s just the way it is.

We’re flying now, and it’s a wonder to me that we touch the ground at all because clearly we don’t need to over one, two, three more fences. I lose remembrance of the order of it but don’t need to remember because I feel it, looked at it until it became a part of my being, and here we are at the spread now, where White Night and Frito Misto both refused, but not Harry—on and past, to the water, and I’m letting him now, trusting him, and we’re flying. I bring him in on the turn, just like Marjory said, and now we’re headed for the double oxer, only the combination left between us and the finish, and if we clear just one more, the ribbon is in the bag and we’re off to the Rolex-Kentucky, and who knows, maybe the Olympics, because why not? Because anything and everything is possible.

Let me, he says, and I say Yes, because how can I not, and I feel the energy gather in his haunches and then pow! He shoots us off the ground and the crest of his neck rises toward me and I thrust my hands forward to keep the reins light and it’s beautiful. I catch a glimpse of a few faces over the boards in the spectator stands and I know they’re rooting for us, holding their breath—even Dan, who is out there although he’s still mad about Roger—and the moment I feel Harry’s hind hocks clear the top I know we’ve done it. We’ve taken first place, and although we’re still airborne I’m rejoicing because we’ve done it, and it can’t be taken away.

His front hooves come down and his neck stretches out, and I allow my fingers to graze his coat in a secret caress as I move my hands back in anticipation of his mouth returning toward me. But it doesn’t. Something’s not right, although I can’t process this because the ground is coming at me as though his legs were sinking right through it. I amconfused, because we cleared the jump and I was paying attention to how his legs came down and I’m irked, not scared, and then I’m not feeling anything, because there’s an explosion as the ground smashes into me. And then blackness.

The blackness is broken by occasional windows of light and gyrating color, snapping open like the shutter of a syncopated camera. Voices are swirling Oh my God, oh my God, can you hear me, don’t try to move her, let us past. Then blackness again before another white light and the rhythmic thud-thudthud- thud of helicopter blades, and someone saying, “Annemarie can you hear me? Stay with me Annemarie. Annemarie, stay with me,” and I really wish she’d stop because all I want to do is sink into the blackness. And then I do and it feels good and I wonder if Harry is there. 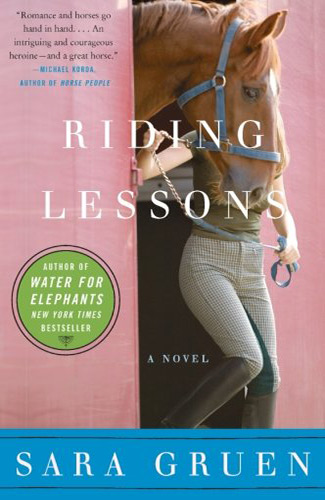