I awake with a start—one moment I’m riding Harry, my zephyr half, my phantom boy, and the next my eyelids flicker and I’m staring at the ceiling. When I realize I’m not on his back at all—I’m huddled under an eiderdown in the freezing bedroom of the apartment above my mother’s stable—I close my eyes and lie perfectly still, trying to coax him to stay. But it’s no use—his body dissolves, the reins melt in my hands, and he gallops off, ephemeral as breath on the wind. I move not a muscle, listening as his hoofbeats fade into the ether.

Harry wafts into my sleep with a regularity that’s astounding considering how effectively he used to elude me. For years after his death I longed for him so badly that I’d squeeze my eyes shut at night and cycle endlessly through visions of him—Harry, with his head high and nostrils flared, cantering through a meadow; Harry, sniffing the wind, his ears perked and chest as solid as bedrock; Harry, flinging those magnificent brindled limbs forward like a Saddlebred—hoping they’d seed a dream.

But they never did. No matter how fiercely I clung to him, at the critical juncture when I lost control he’d slip away to wherever he was, whatever was left, in that place I wasn’t allowed. The few times he did come to me were unbidden and horrifying, and always at the precise moment he crashed to his death beneath me all those years ago.

No more. Now he comes to me in plain view, healthy and whole. And I’m thirty-nine, not eighteen. Sometimes I’m on his back and we’re cantering through fields of swaying grass. Sometimes I’m standing at his shoulder and he’s blowing into my hand, rumbling a greeting from deep within his chest. Sometimes we’re even taking fences, one after another in perfect rhythm. More than two decades gone, and he looms as large in my dreamscape as he did in my life.

A psychologist would probably say that he’s always been there and it’s only now that I’m letting him come. That I am finally at the point where I can think about him without falling to pieces. This is what I think a psychologist would say. But I can’t be sure, because I won’t see one.

Both Mutti and Dan have suggested it, separately, although for the life of me I can’t figure out why. Both times my reaction was a combination of sputtering indignation and hurt tinged with anger. That, and an instant replaying of all my recent actions and comments to try to discover why, exactly, everybody around me always thinks I’m nuts. But I must confess that later— in the privacy of my room, when there was no longer any need to feel defensive—I found the idea intriguing. Not intriguing enough to actually consider it, of course, but intriguing enough that I began trying to guess what a psychologist would make of me. It’s probably not the healthiest pastime for someone who already analyzes things to shreds, but there it is and there’s no stopping it. You can’t pluck an idea out like you can a sliver.

But while Pseudo-Psychologist Me has decided that my dreams are filled to overflowing with Harry because finding his brother has allowed me to heal, there’s another part of me that believes in some way I cannot define and would never admit to that Harry has found a way to come back to me, is giving me his blessing, is glad I have Hurrah safely in a box stall beneath me.

I hug my pillow and sigh, my heart swollen and tender as if I’ve dreamed of a lover. It’s a feeling that will take the length of the day to wear off, and I’m grateful.

It is his gift to me.

I dress quickly, hunched against the cold. I left the window open a crack last night, and my breath comes in puffs as I pull on my jeans, sweater, and quilted vest. I pause at the door and then go back to my dresser to drag a brush through my scraggly hair. I’ll make myself properly presentable later, but at nearly forty you don’t just roll out of bed and go even if you’re not expecting to run into anyone. Particularly if you have a sixteenyear-old daughter who is mortified when, as Eva puts it, she catches me “looking like a sea hag.”

I cleaned my brush only the day before yesterday, but it is once again full of hair. The tangled mess rips free with a noise like Velcro opening. I examine it, analyzing the white-to-blonde ratio. Still mostly blonde, thank God—although I have to hold a couple of the hairs up to the light to make sure. Then I lean forward and peer into the mirror, studying both hair and face for general impressions.

A minute later I hurry down the stairs, booted feet thumping the wood. The main floor of the stable is even colder than the apartment. It’s heated, but not to house standards because the horses go out without blankets and we don’t want to compromise their winter coats. I rub my hands together, hoping to warm them by friction. I slip into the lounge, which is heated separately, twist the thermostat to a sizzling seventy-four degrees, and start a pot of coffee.

And now, for my early morning tonic.

Three or four times a week, fresh from dreams of his brother, I slip downstairs and ride Hurrah. I ride other horses during the day, usually in the context of giving a lesson and finding it easier to show rather than tell, but never Hurrah. Hurrah I ride in private.

I’m not the one “making an issue of it,” as Mutti puts it. It’s everyone else who’s making an issue of it, and that makes it impossible for me to behave normally. It’s a vicious cycle, I know. But how can I ride Hurrah in front of them when I know they’re scrutinizing me for signs of obsession? When I know they’re interpreting my every look and movement? Given what happened last year, I guess I can forgive them for that. But the end result is I can’t ride Hurrah in front of them.

The only exception to this is the stable hands. If I’m still on Hurrah when they arrive, I don’t immediately slip off and lead him back to his stall, and that’s because they know how to give a girl her privacy. They don’t pretend they don’t see me. They simply nod a greeting and leave me alone with my horse; and in gratitude, I always make sure there’s a warm lounge and a pot of coffee waiting for them when they arrive in the morning. 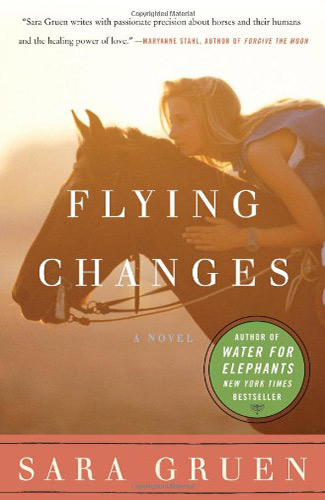